The Quebec and Montreal language school market, due to the distinct character of the Quebec province, has characteristics and elements that distinguish it from the Canadian market. The unique culture and linguistics of the province attract different categories of international and Canadian students. And the government structure and relationships with other Francophone countries fosters the development of new programs.

Here are 5 ways the Quebec language school market differs from the rest of the country.

#1 Quebec Welcomes More Canadian Students Than Any Other Province

Canadians are the largest contingent of non-resident students in Quebec. In 2019, the 2,500 domestic students who chose to study a language in Quebec put Canada ahead of Mexico, Brazil, and China.

No other province or area boasts such numbers. In fact, Canadian students are in the bottom tier for all other markets, evidencing the uniqueness and attractivity of “la Belle Province” for those wishing for a change of scenery and culture without ever leaving the country. 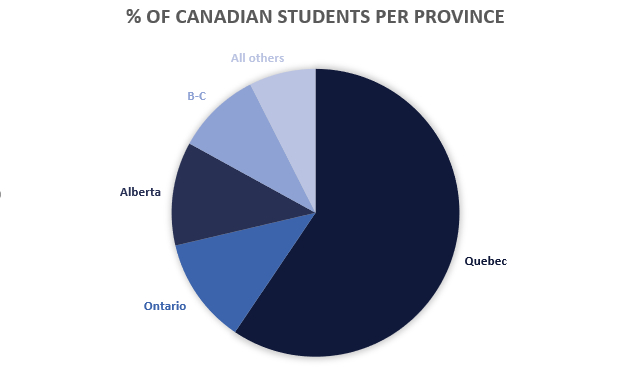 Due to its unique linguistic landscape, Quebec is among the few places in North America to offer French learners a fully immersive experience.

With the bilingual nature of a city like Montreal, some students chose to study in Quebec for the opportunity to study both English and French.

This natural diversity in the Quebec language school market poses some recruitment and marketing challenges. It also presents a great opportunity to diversify their recruitment partnerships and strategies.

#3 Low Numbers of Students from Asia

While many Quebec and Montreal language schools partner with agents from Japan and Korea, their students vastly favor British Columbia, Alberta, and Ontario. Indeed, over half of all Japanese students in Canada chose to study English in B-C.

Japan, Korea, and China are in the top five largest markets for language schools in Canada. The aforementioned provinces show similar numbers. But only China makes it to the top 5 in Quebec. 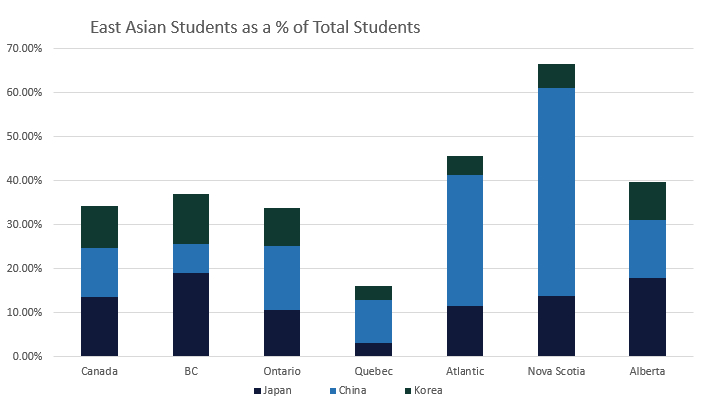 #4 More Students Are on Short-Term and Visitor Stays

While about 25% of students in Canada hold study permits, this number drops to 11% in Quebec.

While in part due to the higher numbers of Canadian students, who do not need study permits, this is a far cry from the 69% of students with study visas in Nova Scotia or the 29% of study permit holders seen in Ontario, the largest market for language education in Canada.

These numbers point to a higher student turnover rate in language schools and different recruitment efforts for language education in Quebec.

The difference is also seen in pathway programs. Half as many (6%) students in Quebec and Montreal language schools study in programs destined for further education than in Ontario (13%). The Canadian average being 11%.

To put it simply, students from outside of Quebec are less likely to stay in Quebec. 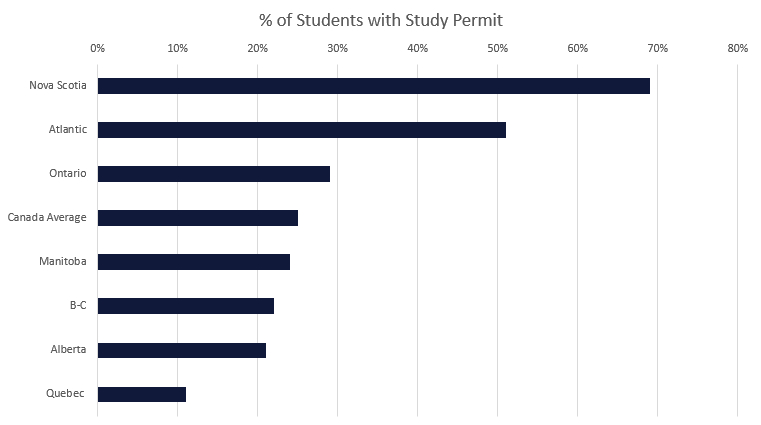 Half of all students who come to Quebec choose to study French. Given the vastly superior demand for English learning programs, in Asian countries notably, it would be logical to develop partnerships in different markets.

This also means that Quebec language schools face competition from their European (mostly French) counterparts on that segment of the market. That’s on top of the domestic and international competition they face regarding their English-speaking programs.

Education agents from Japan and Korea might be more likely to recommend English-speaking cities to their students, and the market for French education is orders of magnitude smaller in these countries.

Quebec language schools face challenges unique to the province and market they are in.

When partnering with an international recruitment agent, some additional training and education on their programs and offers might be necessary.

But by working closely with their recruitment partners, collaborating on marketing materials, and educating their potential students on their offers, they are well-positioned to grow their enrollment numbers.