If you've ever looked into the translation services industry, then you've heard about "localization". 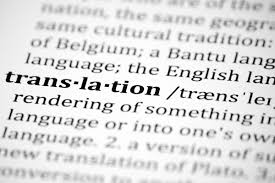 The two words are so linked they are often used interchangeably, so you’d be forgiven for thinking they meant the same thing.

Intuitively though, you might be wondering if that’s really the case. After all, the Merriam-Webster dictionary defines translating as “rendering from one language into another” and localizing as “making local”.

Based on this, it would be logical to assert that making something “local” includes more work than simply copy-pasting text from one language into another. But does the dictionary definition truly reflect reality? 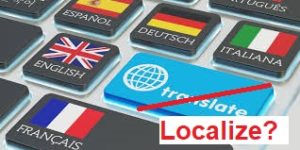 You might remember the first few years of Google Translate. Back then, translated texts made little sense and it was up to you to guess what the source text was. Then it became easier to grasp a general idea of the original text. Now it’s gotten pretty good, yet still not quite there yet.

Word for word translations and changing words from English into another language is simply not what translators do.

They’ll see a word, look at all its possible translations, and choose the one that best fits the meaning and context it appears in. Proofreaders will look at your Google Translation and fix all the incorrect vocab and word choices. Heck, they don’t even have to be professional proofreaders, just well-versed in your target language.

Translators don't operate in a void...

If you give a text to a translator, they will probably localize it to a certain extent.

When seeing the Japanese expression “kaeru no ko wa kaeru” (蛙の子は蛙), there’s little chance they’ll just translate it into English as “the child of a frog is a frog.” They’d recognize it as an unidiomatic translation, look for English expressions that convey the same meaning, and choose “like father, like son,” or “the apple doesn’t fall far from the tree”. Again, it all depends on the context.

Translators are aware of that context. They know the pitfalls of idiomatic expressions and literal translations, and take into account the context. The “local” context for the language they translate into. In short, they localize it, thus killing two birds with one stone.

Sometimes a message is so clear, there’s no need for localization. A good translation of “do not microwave” will get the point across in any language. The translator might make a few adaptations here and there but the message will not stray much from its original meaning.

In fact, most product descriptions, user manuals, numbers, etc. will leave little room for cultural misinterpretations. The capital of Canada will stay Ottawa, whether you live in Asia or Europe.

This is all factual content. It will remain the same, and will be understood the same way in any language.

So, on top of that, if translators already localize idiomatic expressions and make the correct word choices, then aren’t translation and localization more or less the same thing?

Let's take a user manual for example, since we put it in the factual category earlier. On it could be written instructions like:

"Turn on the printer"

"Wait for the red light to stop blinking"

"Don't forget to fill the tray with paper"

However, while it’s almost certainly going to get translated properly, it could still be localized incorrectly. A Japanese translation, or a Chinese translation for example, will tend to be much more wordy. The equivalent of “Please" would certainly be added to all these sentences, and the negatives expressions like "don't forget" would look completely different. Seeing this in English would be a little odd, but would be a lot more acceptable to a Japanese or Chinese user.

Both are valid. In the first case, they’ll have the guarantee that their translation is faithful to the source text, at least on a grammatical and word-count standpoint.

In the second case, they’ll need to rely on experience, what is done in their locale for similar situations, what previous localizations show, etc. and it will make for more natural reading for the end-user.

This is also being faithful to the source text, albeit less in format than in intended meaning.

My wife used to work in customer service with Japanese customers. Her company’s website said something along the lines of “if you are not satisfied with the quality of our products…” Pretty normal disclaimer for any legitimate company.

Every once in a while, she’d get a call for a product return. Here are some of the reasons invoked:

“The jacket is fine but the label has the wrong size.”

“The package it came in was damaged.”

Mind you, the product itself was exactly what the customer ordered. There was nothing wrong with the jacket apart from the label. The jeans were the ones displayed on the website. If you are Canadian, you’d say these were good-quality products.

That’s just for one word. During the localization of full websites, catalogues, etc. the issue might arise with dozens of words and expressions that can be translated literally, but maybe should not. “Be on time” has a different meaning in Japan, where people might arrive 15 minutes early, than in Brazil, where a thirty-minute delay is acceptable. If you were to localize it, it could be more like “Arrive at this time exactly”.

As previously mentioned, the decision to localize your text, not simply translate it, will be made from the translator’s experience and the general context.

How to tell the difference

As we saw, good translators actually do a bit of localization already. The line is usually blurred. A good tentative place to draw it would be between factual and cultural content.

Improper localization can cost you big

Needless to say, the list is not complete. Just to illustrate it:

The English to French translation of “ghostwriter” is “nègre”. It is also an outdated and offensive term for “dark-skinned person”. In this context, the French to English translation should never, ever be what Google Translate suggests.

So what should you do?

Now that we’ve – hopefully – helped clarify what people mean when they say “localization”, let’s look at the real question:

Is your translation project actually a localization project? If so, what can you do to make sure it goes smoothly?

It's a translation project

There are three reasons why you might want to consider your project a simple translation:

If that’s your situation, hire a professional translation team and you should be fine. We already know they won’t translate your text word for word like robots, and it will be a bit faster to prepare than…

It's a localization project

Here you’ll want to look at what you have first:

-     How important is the reader/user’s experience with your brand? Do you need to communicate values and a vision?

-     Do you want to refine your message to speak to your customers in “their language”?

-     What are the customers’ expectations towards your industry? Brand?

-     Is there any potential for misunderstandings?

Then from there, look at your source text and identify three things:

1.   The consequences of an incorrect localization.
we saw with the word “Quality” that potential traps might not always be so obvious. When in doubt, think of the consequences of letting these slip through. In our example, a customer could feel he has the right for a discount or a negative review, while you feel you delivered a high-quality product.
Once you’ve flagged all the major possible issues, let your translators know you want them to adapt the translation to clear any possible misunderstandings.

2.   To which extent you want to adapt your brand message to the locale.
That’s a balancing act most brands are familiar with. Between adapting completely and staying consistent across countries, define your expectations in this area. Then give your instructions to the localization team.

3.   Your users’ expectations.
Based on that, your message will change. Make a list of things impacting your message, such as tone, directness, register, etc. and include it in your localization guidelines.

That’s it. Hope this blog post was useful in explaining, or re-explaining what your interlocutors mean when they talk about project localization.

The bottom line really is that you should hire good, professional translators who can help you with these points. If you are not sure about what to include in your localization guidelines, send us an email and we’ll gladly help you.

One thought on “Localization: more than fancy lingo for “translation”?”